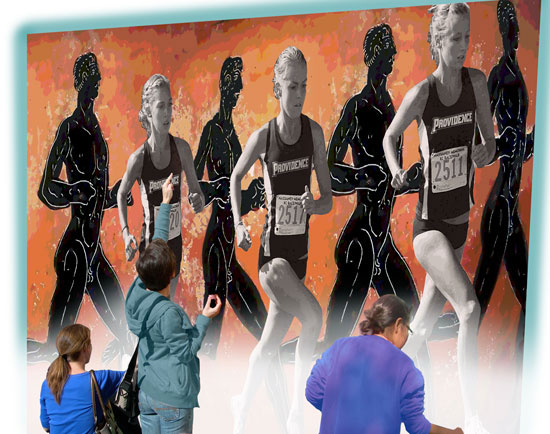 Although not the earliest images in the history of art, representations of athletes are among the earliest, and came to a climax in the magnificent sculptures of Olympic athletes in ancient Greece. Moreover, while we admire the articulation of musculature and movement in these sculptures that came to define the paradigmatic ideal body for all time, these works were much more than that: they defined the high-minded and idealized humanism of ancient Greece, in general, and informed and were informed by a panoply of Greek thought, literature, philosophy, and science. They defined Greece.

The ability of the athlete, and more specifically, the image of the athlete, to stand for something much more than he or she is, is a thread that ties many representations of the athlete across time and cultures. In our own period of modernity, the notorious Nazi filmmaker, Leni Riefenstahl, not only learned from the ancient Greeks but rivaled the ancient Greeks in her ability to present the body perfect; more significantly, she manipulated the filmic medium and the athletic body to promote the idea of German superiority in the Olympics of 1936, and ultimately, of the Aryan race. Hitler, ever aware of the power of imagery, appointed her the regime’s Director of Communication.

Sport has not only been liberally represented in art, but athletes have not infrequently been artists. It has been speculated that the unique combination of hand-eye coordination, discipline, and perfectionism is common to both artists and athletes. Thus, the pairing of sport and art in the project SPORT-ART: Sport, Art, Identity is not only appropriate, it is a natural.

SPORT-ART: Sport, Art, Identity is a project scheduled for February and March 2012 under the aegis of the Department of Art and Art History at Providence College in an unprecedented collaboration with the Department of Athletics. Two exhibitions comprise the centerpiece of this collaboration. In the Student Sports Photography Exhibition, access to a wide variety of male and female student-athletes in practice and intercollegiate competition was givento PC student photographers under the direction of former NBA photographer and current PC photography professor Eric Sung.

Ideas and ideals of race and ethnicity have always been a part of sport, for good and bad, from the Sparta/Athens games of ancient Greece to Riefenstahl’s Aryan propaganda. In the Reilly Art Gallery, simultaneous with the Hunt-Cavanagh show, we present an exhibition of the powerful portfolio of lithographs by Joseph Norman, Out at Home! The Negro Baseball League. Through metaphor, Out at Home! interrogates the banning of black athletes in the mainstream quintessential American sport, baseball, and the resulting formation of a black baseball league. These works provide the opportunity not only to celebrate these marginalized athletes, but to consider the persistent intersection of race and sport in American society and the cultural construction of identity.

Acknowledging the importance of this project, several other departments in the College have become our partners, including American Studies, Biology, Black Studies, the Center for Teaching Excellence, History, and Women’s Studies, as well as the offices of the Dean of the College of Arts and Science, the Balfour Center for Multicultural Activities, the Vice-President of Student Affairs, and the Phillips Memorial Library. In concert with the Athletics initiative, “40 Years of Providence College Women in Sports,” the Department of Women’s Studies has prepared a month-long film and speaker series on “Women in Sports,” and will integrate this theme in its curriculum. In addition to a wide variety of invited speakers, including artist Joseph Norman and David Little, curator of photography at the Minneapolis Institute of Arts, the Center for Teaching Excellence, the Athletic Department and the Department of Art and Art History will co-sponsor an important community forum on athletics and academics at Providence College. Finally, this project will be highlighted by the creation of an in-situ sports mural to be given a permanent home on the Providence College campus.

David E. Little will discuss The Sports Show, an exhibit currently showing in Minneapolis, that looks at the role of photography and media (television, video, and digital technology) in transforming sports from a casual leisure activity into a spectacle of mass participation. Sports, as personal entertainment, have been a favorite subject of photographers at least since the early 20th century, and media imagery quickly moved sports into the public sphere by the end of the century. Since the 1960s, the marriage between sports and media has radically altered the nature of sports, athletes, cultural standing, and fans’ participation.

The Sports Show runs from February 19 to May 13, 2012 at the Minneapolis Institute of Arts.

Peter Tigler, a mural artist based in Santa Monica, CA, creates large-scale public works aimed at engaging audiences from all walks of life in making/ performing art. He has designed a mural to coordinate the efforts of PC students, artists, athletes, alumni, and other PC community participants in a collaborative painting process that connects the themes of art, sport, and identity. In particular, he has created a composition that combines an ancient Greek vase painting representing athletes with a contemporary photograph of an award-winning moment for PC female track athletes by Dominic Channon, ’13.

Thursdays in March will be devoted to a film and speaker series on the theme of Women in Sports. It will honor Women’s History Month, the SPORT:ART Project, and the landmark Providence College celebration, “40 Years of Providence College Women in Sports,” and is a collaboration of the Women’s Athletics Program, the Women’s Studies Department, and the Art History Department. The series is a curricular component of classes in the Departments of Liberal Arts Honors, Women’s Studies, and Psychology. The following films will be shown: A Hero for Daisy, Whip It, A League of their Own, and Girlfight.

A Providence College community discussion of the relationships between athletics and academics, the student-athlete academic and social experience, and the ways in which academics and athletics work together to shape the identity of student-athletes.

The Forum is sponsored by the Center for Teaching Excellence, the Department of Art and Art History and the Athletic Department.

Peter Tigler, a mural artist based in Santa Monica, CA, creates large-scale public works aimed at engaging audiences from all walks of life in making/ performing art. He has designed a mural to coordinate the efforts of PC students, artists, athletes, alumni, and other PC community participants in a collaborative painting process that connects the themes of art, sport, and identity. In particular, he has created a composition that combines an ancient Greek vase painting representing athletes with a contemporary photograph of an award-winning moment for PC female track athletes by Dominic Channon, ’13.

A collaboration of the Providence College Departments of Art/Art History and Athletics.

Visual images connect ideas, confront emotions, and speak across generations. SPORT:ART is a project that looks at the intersections of sport and art through media and the resulting construction of individual and cultural identity. Over a two-month period, a series of exhibits, lectures and programs are dedicated to this topic. The project is intended to forge interdisciplinary alliances traversing Providence College departments, and connecting across the campus and with the community.

Jessica Ho ’14 is majoring in Studio Art (Photo and Digital Imaging concentrations) and an Art History minor. She took some time recently to reflect on her participation in the Sport:Art student photo exhibit in Hunt Cavangh Hall.

” I enjoy taking pictures that tell stories. They could convey beauty and joy, challenges and agonies. The pictures that I took here show the perseverance, resilience and the spirit of the athletes. At every game, they put on their game face, beat the clock, and triumph. They inspire us! I want to capture that synergy, that audacity!

The biggest challenge that I had with this assignment was to make sure that I could capture our athletes at their best moments. At the same time, I needed to make sure I had the right setting on the camera, that I framed the picture at the right angle, and that I was at a safe distance from them! That is why the zoom lens is very important. The pictures also need to be sharp! This sounds easy, but it really was not because the subjects were moving at the speed of light. However, it is also because of these challenges that made Sports Photography fun for me.

I have to thank our athletes for their commitment and their professionalism in all the games. They looked great in the field and there were many great and exciting moments, and, of course, victories! Our very talented athletes made my job as a photographer easier. I was very fortunate to be part of the Sports Photography class and to have this opportunity to tell stories of their victories with my pictures.

Teamwork is the underlining engine and the integral part of any winning team. The athletes worked together as a team to achieve victories. Our Sports Photography class worked as a team and put together an exhibition to show off our athletes. I have to thank Professor Eric Sung and my fellow photographers: Dominic Channon, Michael Dineen, Shannon Pustis, Andrew Sayer. Each one of us was dedicated and passionate about what we did. We are honored to showcase our work.”

Jessica, her peers, and Professor Sung worked diligiently to create evocative images of PC student athletes and in doing so contributed a great deal to the success of the Sport:Art Exhibition as a whole.